Common Injuries In Pro Cycling and How to Cure

Here we have discussed some top Cycling injuries. There are some common types of injuries people suffered a lot. Here we have listed top injuries that people got when they riding on. 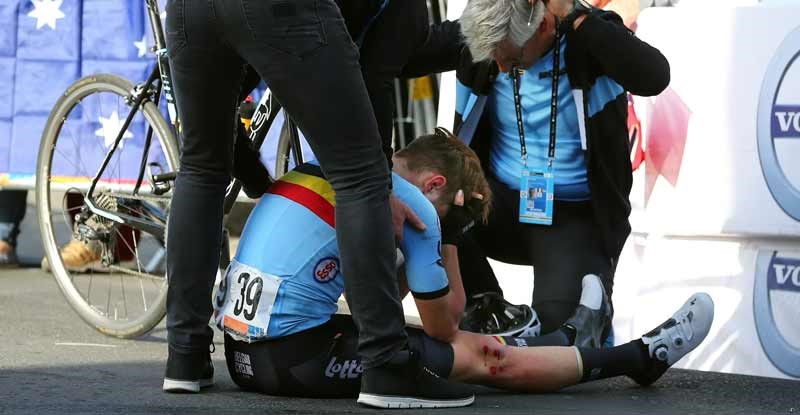 Number one is road rash and that, unfortunately, we saw yesterday and it’s something that we’re working on continuously now.

It’s hard to rank them in terms of how common they are because there are some subtleties there. But I think I’ll run through the five that I think I see most commonly.

So, road rash, clavicle fractures, wrist injuries, concussions, unfortunate and then knee problems. Those are usually chronic overuse. So, let’s start with how to treat road rash.

It literally is superficial, but it can be a really serious problem, especially if it’s a large area and if it causes significant discomfort, it can, it can change riding styles.

how do you deal with a large area of road rash? So, when treating road rash and this has of. This is the bag of tricks that I carry with me.

We use surgical tape to hold it on Omni fixes the one I have with me we kind of grab what’s available in the pharmacies when we run out.

But this is a tape that I use which is Telfa dressings or just a non-stick gauze something you can just get at your local pharmacy.

You’ve probably seen it before kind of a shiny coat to it. So, it doesn’t stick to the wound on top of that, we’ll put just a triple antibiotic ointment in the US we call this Neosporin.

This is a generic version, but you just put it on there and that’ll go directly on the wound and then occasionally.

We’ll use what you have probably seen on the riders burn but you’ve probably seen this on riders in the Peloton just holding bandages on we’ll often use it on the knee and the elbow.

Those areas are moving consistently over the course of know four-to-six-hour stages. Otherwise, this stuff will start to shift and migrate as it gets sweaty and you’ll end up with a bandage off and just being irritated.

So, this is a good way just to put on top of all that and hold it in place. And all this is stuff that you can get, um, from the pharmacy you don’t need, you know, a special medical license or anything to get it. It’s pretty straightforward.

You’re not a real cyclist until you’ve broken your collarbone, which is not true but it is a very common cycling injury though.

Could you first tell us a bit about why it is as soon as you were the forced transfer when someone absolutely?

It’s how cyclists fall and so when the hands are on the bars and they’re going at a relatively high speed.

Oftentimes what you’ll see is sometimes they go straight over the bars, but more often than not, there’s a maneuver to try to avoid a crash and the wheel turns and then they’re going down sideways and the kind of innate tendency the reflex is to throw your hand out.

The weak spot in the chain and it snaps and you were about to show me this incredible ultrasound device.

It taught me through this so it it’s great at the tour and we were very lucky to have an x-ray machine at the end of every stage.

If we’re worried about a fracture, then we’re really left looking for an emergency department hostage. It’s logistically demanding.

It can take a long time out of the rider’s recovery and you know everything they have to do in the evening.

This gel allows the sound waves, which is what’s coming out of them, the transducer here to kind of be transmitted to the skin down through the bone.

If you were to have a fracture, then we might see that right there where that line is really continuous.

So, we talked about clavicles and how, the reason why riders end up kind of twisted and going down with the handout, and the clavicle tends to take the brunt of that.

But as you can imagine, the risks in the head mean, they’re making an impact with the ground so you’re at risk for a skin injury, of course, but the bones of the wrist and the small bones in the base of the hand, kind of where the hand meets the wrist oftentimes are victims to these falls as well.

The bones there and the base of the hand, but some of these are difficult to heal. And so, you know, this is not something that someone would ride with They’d be out of a race, but this little scaphoid bone, because of the way the blood comes into it, it actually comes the blood supply goes down and passes the bone and then comes back toward it.

When you fracture the bone, you can actually cut off the blood supply which obviously makes it difficult if not impossible to heal. So sometimes these little fractures become surgical, so you want to catch them early.

Now we discussed knee injuries you know, obviously, there are traumatic injuries to the knee. So, you fall off the bike, you hit your knee.

That’s a problem that comes up but honestly what I see more often is that the knee is the victim. Chronic overuse injuries and what that means is that there’s maybe a muscular imbalance or a positioning issue.

So. been traveling and they get back on their bike at home and the, I see posted slid a little bit and we have a measure it and it’s like, it’s down two centimeters or a centimeter or whatever

Fit hip strength, core strength, and seeing what is stressing the knee and what’s causing it to hurt concussion.

I remember this all too well and it’s very unpleasant and talks us through one diagnosis and then what you do with a rider with a concussion is something that certainly affects cyclists.

I think you see in cycling that that’s, that’s mirrored, that we’re starting to have these protocols that are implemented. We’re starting to recognize it and just be aware of it a lot more.

It can be difficult because the diagnosis of concussion is a subjective one, which means that no test tells us someone has a concussion.

You can’t scan them and you can’t do blood work and so then it’s very much looking at. Their balance is looking at their recall and their memory and it’s looking at the symptoms that they relate to us.

Because like while it might sound maybe to our viewers, like better safe and if you pull someone out on day three of a grand tour and they don’t have concussion just because they might’ve hit their head.

Like if we get back to the hotel and there’s there perfectly fine, everything, like I’ll be kicking myself, but I would rather that than put them back in and be kicking myself for other reasons.

The other tricky thing with concussions is symptoms usually present over time. It’s actually pretty uncommon in my experience that a rider goes down his throat.

He’s standing there with a bike and immediately has concussion symptoms.

So, the most common injuries that pro riders see are probably road rash, broken collarbone, wrist injuries, concussion, and knee pain. And I think that’s probably the same for most recreational cyclists too.

So, I hope you found this Interesting. Thank you again and good luck with the rest of the tour. If you like this article, give us a thumb and want more info then you can visit OutdoorXsports and get more tips and tricks.

Exotic fruit, the boom continues and everyone really likes it

Mango, avocado, and papaya, but also lychees, limes, and Goji berries: in recent years, these fruits are becoming more and more frequent...

How to Motivate Yourself to Use the College Gym This Year

Getting into the gym and actually working out on a regular basis is harder than it may seem. You wouldn't believe how many people out there...

This article is all about the benefits of exercise, the various forms available to choose from and finding the right fitness class for your...

Kratom Weight For Loss: How it Can Help

Obesity and being overweight is a prevalent global concern that's growing exponentially. Experts use BMI (body mass index) to differentiate...

10 Benefits of showering with cold water

When we think of taking a shower, pleasant and stimulating sensations are always evoked, especially in the summer months when it is hotter...